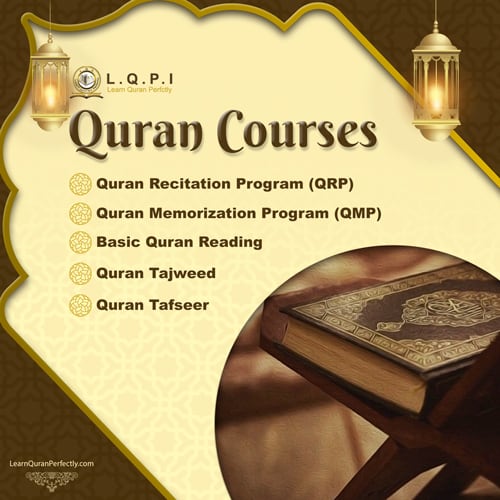 Are you ready to learn Quran perfectly? LQPI has the most advanced technology & techniques to learn Quran online from the convenience of your home. Through our “Complete Quran Learning Path”, you or your kids can learn Quran online fast & easy with highly-qualified and native Quran teachers. Our Quran learning programs are totally flexible and customizable based on your needs, goals, and abilities. Moreover, NO NEED to have any prior knowledge of Arabic or Quran to enroll in this learning path; One of our qualified teachers will assess your course level and will advise you appropriate course level to join.

Learn to read Quran in the best possible manner with highly qualified native tutors from Egypt.

This course is particularly beneficial for children trying to learn the Quran for the first time. Adults can also take this course from the comfort of their home. The course starts with the basic Arabic letters and gradually progresses to enhance the reading skills of the students.

Arabic alphabets are the keys to reading Arabic and the Quran accordingly. Just like any other language, students need to learn the alphabets first to facilitate reading this language.

This course is divided into 3 levels:

Syllabus & Course Duration – Going through a khatmah of Recitation in two years according to the following plan:

Syllabus & Course Duration – Going through a khatmah of Recitation in two years according to the following plan:

Syllabus & Course Duration – Going through a khatmah of Recitation in one year according to the following plan:

Learn tajweed at LQPI to read the Quran in an alluring and correct manner.

Tajweed is essential to follow and abide by to recite the Holy Quran rightfully and carefully. It’s a pre-requisite to acquiring a good recitation. Following these rules of Tajweed will make our recitation flawless and errorless, which is how it needs to be.

To learn the Quran with Tajweed pronunciation online, a student must first master the basic study of the Quran. A student who begins a Tajweed course without a firm comprehension of the Quranic structure, verse and language will struggle to be able to articulate the proper

This course is divided into 3 levels:

Learn the meanings of the words of the Holy Quran by certified tutors graduated from Al-Azhar University.

The tutors start the online “Tafseer” course by explaining the meanings of the first Surah in the Holy Quran which is Surat al-Fatiha, and they complete till the end of the Noble Quran.

Being aware of the meanings of the Quranic verses increases and strengthens the Muslim’s faith, gladdens his/her heart and gives him/her the chance to taste the magnificence, the eloquence and the beauty of the blessed words.

Classes Around The Clock

How To Learn Quran Online at LQPI?

Fill in the needful data, so that the assigned tutor could contact you and confirm the appointment for the first session.

Once you submit your free trial request, our student support team will contact you to suggest your selected package and curriculum and way of payment and enrollment through whats App or email or via Skype.

Download Zoom app or Skype to start taking the class at the scheduled appointment.

No matter if you were born a Muslim or you’ve just converted to Islam; learning the Quran is one of the most important acts you can do in this life.

The Holy Quran is the final revelation of Allah (SWT) to all of mankind. It started to be revealed to the Prophet Muhammad (PBUH) through the angel “Gabriel (Jibril)” at the night of decree (Laylat al-Qadr).

Allah (SWT) says in the Quran:

And this [Qur’an] is a Book We have revealed [which is] blessed, so follow it and fear Allah that you may receive mercy. [Quran 6:155]

The Quran contains all kinds of principles of creed, deeds, and ethics that will make man attain real bliss. It is a great literary miracle in terms of its words and meaning. The Prophet Muhammad (PBUH) stated the following regarding the issue:

“Every Prophet was given miracles because of which people believed, but what I have been given, is Divine Inspiration which Allah has revealed to me. So I hope that my followers will outnumber the followers of the other Prophets on the Day of Resurrection.”(Hadith | Sahih Bukhari)

Moreover, reading the Qur’an fulfills an Islamic duty; every Muslim should read & recite the Quran, revere it, act upon its teachings, and refrain from abandoning it in any form of abandonment.

Another situation shows how much learning Quran is important when the Prophet Muhammad said:

“Read the Holy Qur’an and it will come on Judgment Day as an intercessor; when you are in need of an intercessor he will intercede for you,” [Hadith | Sahih Muslim]

This means that each verse, each letter your read in the Quran will intercede for you on Judgment Day. What is better than that?

Another importance of learning Quran is that reciters of the Quran will be in the company of noble and obedient angels.